GIMMEFIVE celebrates the independent artist.  Each week our guest will answer five questions and be the subject of a YOU HAIKU.  Our spotlight will give you an inside look into the mind of an artist.  Be sure to check out their work, and tell them Greg sent you… 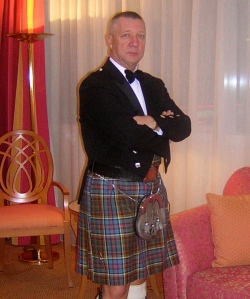 We make connections in this life that sometimes have no meaning.  Someone reaches out to you, someone you may never meet, with seemingly no similarities to you at all, and yet you find yourself connected to that person, if only through laughter.  Seumas is a character…

What inspired your latest project?

Vengeance Wears Black is the second in a series of at least five crime fiction novels, all of which involve former SAS commandos running a specialist security firm, deploying their black operations skills against international criminal gangs. When I worked in the Far East, at one point, for about three years, I was protected by SAS-trained bodyguards with an armoured car. I guess a lot of that experience has stuck with me. The rest is culled from my banking career. All of that stuff sticks its nose in at various parts of my writing.

Why did you become an ARTIST?

Why is the sky so blue? I think it’s a realization of the lifelong desire to get at least one book out there. We’re all supposed to have a minimum of one of these in us. Now, try to stop me if you dare!

Who is your favorite fictional character and why?

In East of Eden by John Steinbeck, my favourite character is Lee, the American-Chinese cook and house help to the Trask family. He chooses to speak in pidgin English as a survival mechanism, but he is the philosophical teacher, central to much of the story. I read that almost 50 years ago, and the strength of that character sticks with me today.

If you were a spy, what would your codename be?

What profession other than your own would you like to attempt?

Seumas Gallacher | The You Haiku by Greg Morton

With an irreverent stroke

Thanks to Seumas Gallacher for being a part of the independent artist spotlight.  Know an independent singer, writer, artist?  Send an email suggestion and we’ll try and include them on GimmeFive!