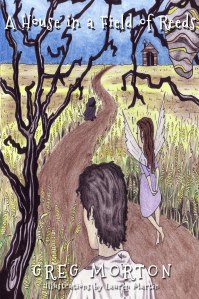 Our journey begins with Mrs. Potter’s Lullaby, and follows Mrs. Potter and her friend Edmund as they travel along a path contemplating spring’s delay.  It isn’t until they stumble across a man sitting alone by the side of the path, and discover he is Death, that the mystery of the season begins to unfold.  Now many people wouldn’t stop to speak with Death, let alone try and help him.  But Mrs. Potter is a pixie, you see, and pixies are very, very special.

The season of summer leads us down the railway, as Evers and Indira leave boarding school in Gobbler’s Knob in their attempt to make it to the midsummer’s party at their home in Eiderdown.  In Along the Rail to Eiderdown, the best friends encounter a mysterious girl, an evil card game, a friendly giant, a boy trapped in a tree and more.  Along the way, Evers and Indira discover more than just the way home…

Autumn finds Wyatt on the eve of selling his beloved orchard and home.  He has been abandoned by his workers, and without anyone to help him harvest his apples he cannot afford to stay.  But as dawn breaks on such a sad day, Wyatt awakes to bushels and bushels of harvested apples, ready for market!  Wyatt will find that the love for his trees has been felt, and the love he feels in return may lead him to discover the secret behind Aiden in the Apple Orchard.

Every legend needs a beginning.  The greatest legend of winter begins with a King who must lose everything he loves to an empire that is defeating the lands.  Our King finds himself surrounded by the orphaned children, and though he is unsure if his new kingdom can conquer evil, he must show the kids how to do battle with the one weapon he has left.  Hope.  Discover the gifts inside The Kingdom of Winter.

A House in a Field of Reeds, featuring Mrs. Potter’s Lullaby, Along the Rail to Eiderdown, Aiden in the Apple Orchard and The Kingdom of Winter.