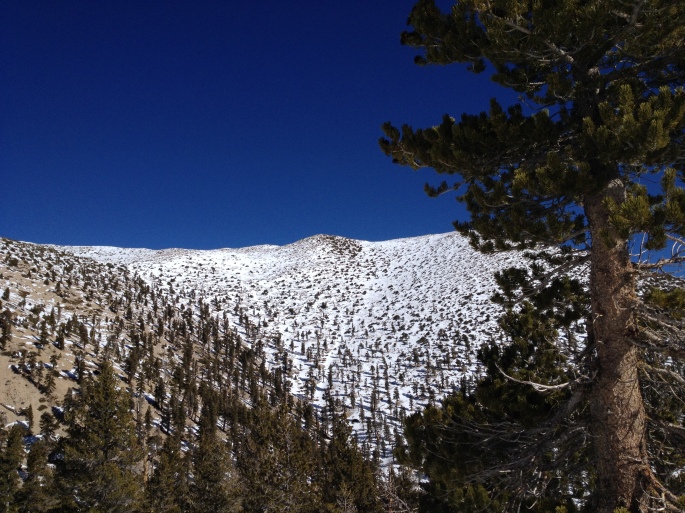 “You don’t conquer the mountain, you only conquer yourself.” Jim Whittaker

My plans for 2015, I think, are ambitious.  Maybe too ambitious.  But I’m okay with that.  It’s important that goals push what we’re capable of doing.  I think there’s a chance I won’t accomplish all of my goals for the year, but I think, in fact I already know, I’ll be getting myself out of my comfort zone and achieving more this year than I did the year before.

Sunday’s trip to the mountains was a perfect example of this.  My partner Brett and I attempted the 18.6 mile (roundtrip), 11,503 summit of San Gorgonio, nicknamed Old Greyback (or often, San G).  To date, our biggest mileage trip has been Ontario Peak at 12.4 miles.  That trip was a long day, but Ontario Peak is only 8,700’ in elevation which doesn’t take acclimatization for most hikers.  It’s a relatively easy, albeit long, walk.

San Gorgonio is, in most respects, a similar hike as the one to Ontario Peak.  In most respects.  What makes the San G hike the most different is that it begins with a steep section of switchbacks that climbs 1,000’ in elevation in about a mile.  We did this portion of the trail at 5:30 in the morning, in the dark, giving us the opportunity to focus on the task at hand and not get distracted from the amazing scenery that builds as one climbs.  Once the steep section was put behind us, I felt the trail resembled the Icehouse Canyon trail that leads toward Ontario, only on a much grander scale.  Elevation, too, sets San G apart from other mountains.  It’s the tallest mountain in Southern California (and taller than the highest point in all but 12 U.S. states).

It’s a long haul.  Both ways.  And this being the first real trip of the season, my partner wasn’t fully prepared for the distance.  Mentally?  Without a doubt.  Physically?  Not quite.  I’m not entirely comfortable with calling him out here on the blog, but it is with reason.  For a man who has dedicated his time to work (a lot, maybe too much) and family (a lot, but never too much) he has recently not dedicated enough time for himself.  His selflessness is highly admirable, but it’s out of balance.

Work/Life balance has been something I’ve preached for years.  It has become increasingly important to me in recent years.  Balance will continue to be something you’ll read about here.  For Brett, dedication to work and others is great, but not at the total sacrifice of individual goals.  This is something I’ve had discussions with him about, as well as conversations with his wife.  She agrees, there has to be a little bit of selfishness as well.  Not at the sacrifice of family goals or work goals.  It has to be a balance.

As I mentioned, for my partner things are out of balance right now.  And he knows it.  Of course, with that said, this was a significant trip early in the season for us both.  We’ve generally had a few shorter trips under our belt before tackling something bigger, say the 10,064 summit of Mt. Baldy.

We could have reached the summit yesterday, but it would have been at a cost.  Estimating the time that others have reached the top, we were already beyond that when we stopped.  Additionally, we always set an absolute turn around time when we’re in the mountains.  This gives us ample time to descend, regardless of where we are on the trail.  On Sunday, we were fast approaching our absolute turn around time.  To push past that just to reach the summit would have been to jeopardize the one true goal of climbing mountains – Returning home safely.

The mileage and altitude were humbling.  Of all the time we’ve spent on Mt. Baldy and the surrounding peaks in that range, there are bigger mountains out there.  Mountains we want to climb, but to do so we have to put in the work.  For me, Sunday’s lesson was this – The training I’ve put in paid dividends, but it’s not enough.  I need to increase my training to be where I want to be.

I’m sure for Brett, the lesson was clear – Be more selfish and train.  All day today I’m reminded of my favorite quote from surf legend Laird Hamilton.  He says “If you don’t prepare, don’t be surprised if you fail.”  This is good advice, regardless of what kind of mountain (literal or figurative) you’re trying to climb.

Of course, in the grand scheme of things, yesterday was a monumental success.  I spent a sun drenched day on a new mountain, enjoying the company of my closest friend, surrounded by nature, and best of all I got home safely to my incredible wife who was eager to hear all about my adventure.

One thought on “When Success is Dressed Like Failure”