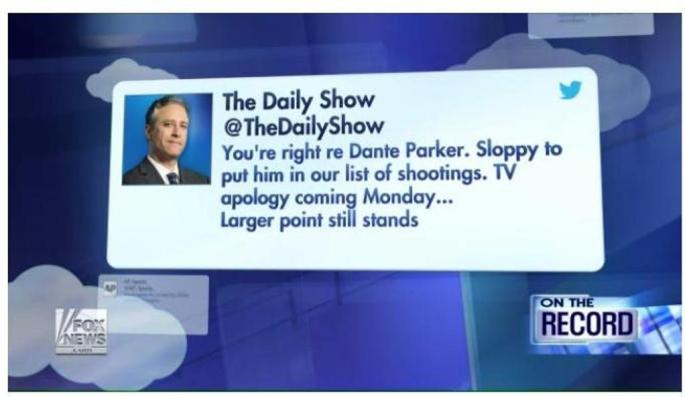 It’s hugely disappointing to see someone with Jon Stewart & The Daily Show’s influence and financial resources not do their diligence with their “reporting”.  Entertainment or not, this show is (sadly) a major source for real news for young adults.  You know, the ones who will lead this country one day?

I won’t talk politics here.  I’m not interested in HOW you vote, but THAT you vote AND get involved with your community.  If you don’t do both, don’t expect your community to be what you want it to be.  With that said, be sure to get your information from multiple legitimate news sources.

The Daily Show = No.

That guy you know who knows a guy who lost a kidney in a bathtub in Vegas = NO.

Sure, Fox News has their slant, and MSNBC has theirs, and CNN has theirs, etc….Which is why I encourage multiple sources.  Take the time and energy it takes to make an educated decision, because if you don’t, then someone else is just making the decision for you.  And it is WORK to weed through all of the internet noise.  And people are lazy, which is why we’re in this mess to begin with.  But don’t be one of the herd, people.

I have a lot of law enforcement friends who are basically family.  Their job sucks.  They are good people who I worry about all the time.  Not only do they have to deal with the dregs of society who insist on breaking the law, but they are impacted by the cops out there who aren’t doing their jobs.  This isn’t an indictment of what is happening.  In truth, because of all the noise, I can’t be sure what has happened in Missouri or New York or New Jersey or Florida or even San Bernardino.

And as such, I’m not going to start presenting my opinion about what is happening AS facts…Especially if I haven’t done my diligence to vet the real facts.

If you really want your opinion to matter…Stop standing on the sidelines.  Get involved.  Get out from behind the safety and anonymity of the internet and become part of the process.  See first hand what it takes to work for or run a government agency.  Change what isn’t working.  Stop blaming and start doing.  Sitting behind a desk in front of a computer or in front of a television camera isn’t being part of the process.  Roll up your sleeves, put your time where your mouth is and make your opinion matter.