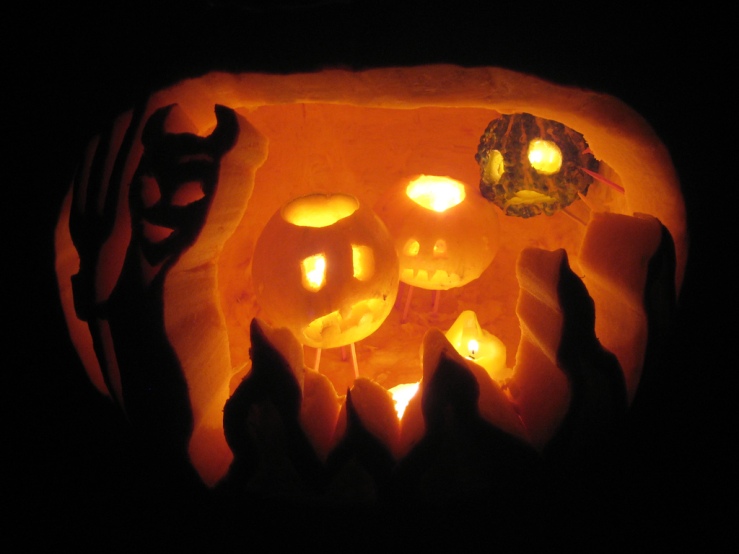 I was telling Sandra this might be the last Halloween I celebrate.  Seriously.  Things have changed, and while I really hate thinking that I’m getting old, my problems with the changes are simple and I don’t necessarily think attributed to my age.  Maybe.  Either way, I was a little put off.  But let me begin at the beginning…

Nothing like an unexpectedly broken water pipe to begin your Halloween.  I guess for most of the day I was destined to be dressed like “Greg, the ditch digger” or “Greg, the plumber” or “Greg, sitting in mud trying desperately to fix a million year old rotten galvanized pipe without digging up the entire yard”.  That last one isn’t a difficult costume at all really.

My ghoulish nightmares began the night before Halloween.  Sandra and I were in bed watching TV when we could hear water running.  Our home is nearly a century old, on a raised foundation, so it doesn’t take much to hear things go bump in the night.  Or in this case, the sound water makes when it’s running through pipes.  Naturally I went for a walk to discover the source of the noise.  There it was, in the yard, in all its bubbling and gurgling glory, one of our planters was doing its best impression of a scene from a Saturday afternoon theatrical showing of “Swamp Thing”.  Unfortunately, that meant only one thing – I had to turn off the water to the house in order to get some sleep.  I certainly wasn’t going to begin tackling this project late at night.  Heck, I didn’t want to tackle the problem at all, but as water is a key element in our house for showers and toilets and brushing teeth, I was destined to tackle the problem the next morning.

A day spent getting dirty is one I actually look forward to, if I’ve been on a mountain trail all day.  Sitting in mud and digging holes and looking at a pipe that has more corrosion on it than Keith Richards isn’t how I like to spend my days.  If I’m being honest, though, I got the problem fixed with a little elbow grease and some help from my dear friend and neighbor.  And it didn’t take me long to fix, but that didn’t make the situation any better.  I was still pretty grumpy.

I didn’t get much sleep the night before.  I’m not sure if it was worrying about fixing the leak or the fact that my dog was restless or the gazillion other things that generally wreak havoc on my mind, I didn’t sleep well.  And of course, since we didn’t have water, I didn’t make coffee.  I wouldn’t say that I’m coffee dependent, but I am better off in the morning if I’ve had a cup.  And it’s not the caffeine, as I drink decaf most days.  I guess it’s the reassuring, warm brew.  Who knows, but one cup goes a long way to helping me be a little less grumpy.  Which would have helped on a day I had to get up and fix problem plumbing.

It was early afternoon when my neighbor and I finished the fix.  I was happy to be able to turn the water back on, but quite exhausted actually.  Mentally and without much sleep (or coffee) I’d had a day.  Strike up the violins people…

A short nap didn’t do much to cure a headache or provide any relief for a serious case of “grumpy”.  So maybe that set the tone.  And try as I might to get into the Halloween spirit, it just wasn’t happening.  Things just haven’t been the same the past few years since the kids grew up and haven’t been home for All Hallow’s Eve.  Add to that my water pipe fiasco, and listening to the doorbell ring for a few hours wasn’t high on my “to do” list.

But strange how that changes when the first young boy to quietly knock on the door and basically whisper “Trick or Treat” was dressed like a police offer from the 1950s.  I dropped a bite sized Butterfinger into his basket and he whispered “Thank You” which got me into the spirit of things.  It was a good start, but that would change before too long.

We were a dozen or so costumed characters into our night when the first of the teenagers came to the door.  We saw a lot of nerds last night, which I thought was interesting.  Their costumes were all generally the same, various collared shirts with pocket protectors, pants hiked up real high, suspenders and across the board all of them had tape running down the middle of their black rimmed glasses.  Except for one kid, who was dressed in a tweed jacket, bow tie and black rimmed glasses…sans tape.   So in a jovial manner I asked “What are you dressed as?”  to which I got the most severe look of disdain and shrug of the shoulders.  No response, no “Trick or Treat”, just attitude.  He was thirteen at most, and it was the last age he was gonna see if he didn’t take his shrugging tweed-itude off my porch in a hurry.

I mean…REALLY?  I paid for this candy!  Are these kids really so entitled that they can dress up in their worst attitude and mosey up to my door and just EXPECT me to fork over the goods?  Of course, that’s exactly what happened because I had already dropped a Starbust into his bag.

My own bad-itude returned.  I was ready to close up shop right then and there, but Sandra’s sweet heart prevailed.  “What about the little ones?”  Yes, the little ones.  The cute, sweet little kids who have yet to age to the point of a surly, self absorbed moral compass.

More little ones.  Princesses, Iron Men, Batmen, Spidermen, Ninjas, a grown man dressed like Cupid.  All pleasant and appreciative of the tooth decay I was dishing out.  We had Rapunzel, more cops, a boy dressed like a firefighter, and more nerds.

Some kid came to the door wearing shorts, a t-shirt and black hash marks under his eyes.  No candy sack.  SERIOUSLY?  Uh….

NO CANDY FOR YOU!

No effort, no candy.  Sheesh…He said he was a football player.  Uh, no.  You’re a high school kid who thinks he’s too cool to dress for Halloween.  At least he didn’t give me attitude when I told him he wasn’t getting candy.  There’s that…

I was disgruntled.  Disappointed.  Disillusioned.  My faith in the future of humanity was fading.  I was beginning to appreciate why animals in the wild eat their young.  I was at a loss to figure where the fun was in not dressing up and yet going out to get candy.  Half the fun of Halloween is yelling “Trick or Treat” and acting goofy in your costume.  Did I miss a memo when I was young?  Did I miss a memo now that I’m (gulp) older?

I paced.  Maybe my bad day carried over into the night.  Maybe things weren’t that bad, that kids today aren’t really these selfish little hobgoblins.  Maybe.

The door bell rang.  More teenagers.  Dressed in great costumes.  The Mad Hatter was probably the most sophisticated costume of the night.  The kid was gracious, and looked to be having fun.  More nerds, more of everything.

A couple of half-assed efforts.  One kid with a werewolf mask.  No costume, just the mask.  He SCREAMED “Trick or Treat” like he didn’t think I’d hear him otherwise through that mask.  I could hear him shouting “Thank You” as he leapt from the porch and across the lawn on his way to scream at the neighbors.  It wasn’t much, but it was some effort.

I was resisting the urge to believe the holiday continued to have merit.  That my hard earned dollars should go to waste each year in an effort to cause hyper-active toddlers and cavities.  My faith restored?

Yes.  But only because Snow White’s Queen Grimhilde, disguised as a green faced hag complete with apple, appeared at my door.  She was four years old.  Tiny.  She was so shy she couldn’t even mutter the magic words to get some candy.  Her cauldron was only partially filled.  Her mom stood next to her and did the best she could to coax the words from her.  My heart melted.  Of course she got some candy without saying “Trick or Treat”.  Her mom said thank you.  The little hag turned and slowly walked away.

She was eating the apple.

It made up for a weird night of kids.  Maybe that’s what Halloween is supposed to be about, weird experiences and tests of faith in humanity.  In the end, Sandra reminded me that we had more good kids than bad.  And though the frustrating kids were frustrating, the cute kids made us laugh and ultimately we had fun.  So…Maybe next year we’ll do this again.

But maybe next year I’ll just scare the crap out of the ones who don’t dress up!!!

4 thoughts on “Restoring My Faith in Halloween”