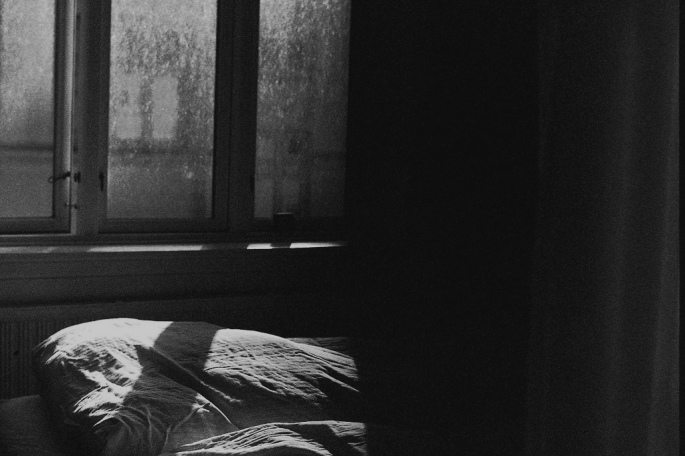 I guess I haven’t been as unproductive as I first thought.  I wrote a journal entry just last Thursday, though I guess I can attribute my confusion to seemingly endless days of illness and the reoccurring horror of 3:30am.  Like Freddy Krueger scaring me down the hallway, dragging his stainless steel press on nails along the wall, engraving crooked numbers into the lathe and plaster.

I don’t think it coincidence the numbers that penetrate the darkness of my room in the middle of the night are blood red.  Staring at me, as if with lifeless eyes and unsympathetic heart into my very soul.

Such has been my existence for nearly a fortnight.  I was encumbered by fever and more.  But alas, the influenza was merely a bit player in the shadows of my psyche, tearing me apart each waking moment after another.  I tried to parlay my misery with narcotics, only to be defied the very pleasure I sought most.  A full night’s rest.

Ok, so maybe I’m being overly dramatic.  I am a guy, and the Guy Manual does stipulate that I must be reduced to the behavior of a toddler whenever I get sick.  I didn’t write the manual, I just follow it.  Such as it is, aside from sleeping a lot when I get sick, I’m really not much of a whiner.  Although, right now I’m sure my three readers would disagree.  Let’s face it, nothing warrants a whine session like repeat offenses of waking up in the middle of the night.  I’m allowed something, right?

But here is where my real beef is…I’ve been waking up at the EXACT window of time every night.  This isn’t a case of going to bed at 11:00pm, waking up at 1:00am and being miserable for a time before drifting off again, only to go to bed the following night at 11:00pm and then waking up at 2:25 and being miserable for a time before drifting off to sleep again.  It’s not like I’m waking up at some random time.  This is a ten minute window.  3:25am to 3:35am.   The danger zone.  During the same ten minutes, for varying reasons, I wake every night.  EVERY.  NIGHT.

Like it’s the witching minutes, and I was reduced to being Bill Murray in a late night showing of Groundhog Day without the Sonny & Cher tune or the knee-slapping hijinks.  The first few nights seemed an uncanny coincidence, a curiosity even, something that gave me food for thought as I peered through the darkness like a One-Eyed Jack, squinting like Mr. Magoo to make sense of the blurred lines of neon red pouring out of digital clock sixteen inches from my head.  Hmmm….3:30am.

That first night I awoke, did my Costanza squint and realized my throat hurt.  I hadn’t been sick in long, long time, but silly me, I thought it was a cold.  3:30am.  That second night, my throat still hurt, only worse.  And it took me longer to drift back to sleep.  3:30am.  From there the flood gates opened and each night became an episode of CSI, putting clues together to determine the reason behind another restless sleep.  3:30am….

3:28am – Cat meowing.  Incessantly.  Pretty much worse than being chased by Freddy Krueger.  Kill me now or at least tear off my ears.

3:30am – My dog barking.  Again.  I let her out, only to discover there are raccoons in the tree.  Nothing I’d rather do than whisper loudly in my bare feet at some ungodly hour in a feeble attempt to pry my mutt’s attention from the antagonizing rodent twenty feet above her.

3:30am – ME getting out of bed, potty break.  Shouldn’t have had that glass of water before bed.  How does my bladder know what time it is?  Is this some sick potty break joke??

3:35am – Dog barking.  Again.  Because, apparently, she can.  Somebody please tell me we’re being invaded by extra terrestrials.  A quick walk around the house reveals…It’s dark outside.  Good thing the dog is barking then.

3:29am – Influenza has invaded my chest.  A burning, nagging cough that allows me to sleep until the witching hour.  At least it’s early in the morning and I’m still sick.  I have that going for me.

3:30am – Battle Royale between me and the dog.  She wins.  It has become brutally apparent to me that I’m the pet and she is the owner.  I purposely put her out late to avoid an early morning potty break.  A futile effort.  Obviously I missed the necessity of running around the yard in the light of a full moon.   Cold, bare feet meet cold, dewy grass.  More whispering loudly.  More canine insolence.

I’ve become keenly suspicious of the dog.  She spends a great deal of time lying down in the office, of which there is no clock.  I’ve checked all four legs for signs of a tan line brought on by the use of a watch, but have failed to find any real evidence.  I’m convinced she’s the mastermind of this 3:30am ritual or at the least a very willing conspirator.  It is quite possible the same acute sense that allows her to spaz out moments before an earthquake also allows to her to sense I have the flu, and thus she feels I shouldn’t be able to sleep into the night past 3:30am.  It is clear I’ve underestimated the amusement of a creature that eats cat poop and chases its own tail.

3:30am – I feel fine, rested even.  I’m still sick, but I can tell my immune system has discovered the vulnerabilities of the influenza, and like Will Smith in Independence Day has destroyed the Mother Ship allowing the weird militia of crazy, drunk war veterans and U.S. Presidents to destroy the remaining aliens that are hovering over the inner workings of my body.  Okay, so maybe this is a weak analogy, but what do you expect, it’s THREE FREAKIN’ THIRTY IN THE MORNING?!?  Apparently I’m awake just be awake.

I would love to say it’s over, but it isn’t.

It’s not insomnia so much as it is just waking up at the same time every night.  I half expect Rod Serling to be standing bed-side each night with some moral tale.  I would get out of bed at that hour and try to be productive, but it isn’t that kind of “awake” either.  Oh, and those “narcotics” I spoke of?  Those OTC boxes with marketing phrases like “fall asleep fast” and “help get a full night’s rest” strategically placed in little exciting bubbles on the packaging?  False advertising.

But I have a secret weapon.

(Stay tuned.  This will either be a rousing success or my next entry will be made at 3:30am tomorrow…)

One thought on “The Diabolical Scheme of 3:30am”