I’m a little short, so standing on a soap box to make even a non-ranting point is pretty common for me.  It’s really the only way I can see above the crowd.

But I digress, let’s roll…

I read an article this morning about a Chicago suburb putting up signs to offer a dose of reality back to parents about the nature of youth sports.  This picture actually crops out the part of the sign that also informs parents that umpires are human, that they make mistakes, that people don’t generally yell at the parents in public when they make mistakes, and that the city of Buffalo Grove will be trusting the judgment of the umpires and will not be utilizing video for instant replay. 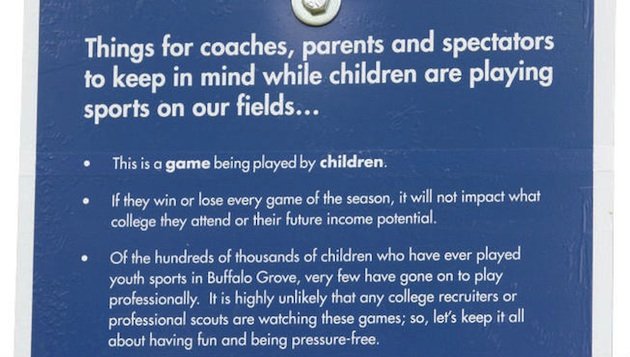 The city did all of this in a simple sign, with a lot of class, no name calling and without the aid of an accompanying Gibb’s slap.  I think the absence of the Gibb’s slap is a mistake, but who am I to judge?

No, the fact remains is that the city is spending valuable taxpayer resources to parent the parents with reminders of how they should behave, regardless of how common sense this should all seem.  And they aren’t the first city to do this.  These cities are rising above the bad behavior, acting like adults and attempting to handle the manner with before mentioned class, and dare I say some very admirable humor.

But dare I also say this is a band-aid to the real problem?  I dare!  The real problem is the million dollar athlete who throws a temper tantrum in front of 40,000 fans in a stadium and millions on television, jumping up and down, slamming his helmet to the ground and waving his arms like a chicken.

Oh, he gets paid millions and this is his job so it’s okay?  Like anyone who works in an industry that isn’t professional sports can behave like this and NOT get fired on the spot?  Lives aren’t at stake in a professional baseball game, folks.  Money, yes.  Lives?  No, and let’s stop creating these kinds of sociological problems as a result of our chasing a buck.

Both kids and parents are learning from this example of man-child gone wild.  It’s a perfect example of taking the game too seriously.  And I won’t even listen to the argument that parents are grooming their kids to be professional athletes.  It’s a long shot.  The Tiger Woods and Bryce Harpers of the world, those kids essentially groomed to be professional athletes, are rare.  It may seem like more and more “kids” are becoming elite athletes and entering into the professional fray, but it only seems like that.

That doesn’t mean kids shouldn’t try to win.  Or improve.  Or take it seriously…To a point.

I think winning is an essential part of sports.  I think keeping score is an essential part of sports.  At nearly every level.  I don’t believe that every kid should be given a trophy just for playing.  Losing is the best way to learn how to win.  Losing with grace.  THAT is the example the man-child professional should be teaching our kids.  Taking a loss, handling it with grace and learning to use that loss to improve himself so that he can win.  And then winning with even more grace.

There are perfect examples of class and dignity that I’m talking about.  Derek Jeter may argue some calls on the field, but not to the point of ridiculousness.  Same too for Albert Pujols.  By the way, each man has multiple World Series Championships and are leaders in their respective clubhouses.

Perennial hot-head Milton Bradley on the other hand, does not have a championship ring.  He is not a leader in any clubhouse he’s been in, and recently was convicted of spousal abuse (a testament that his raging anger didn’t just stay between the lines.)

It could be said that Milton Bradley is an exception.  How about Carlos Zambrano (formerly of the Cubs)?  There are more…many, many more.  Too many to consider them all “exceptions”.

Ok, I’ll give you this.  Watching Billy Martin kick dirt on an umpire’s shoes was funny.  But that doesn’t make it right.  And it isn’t what we should be teaching our kids.  Or our parents.

In fact, if as a fan I’m helping pay a guy millions of dollars – Shouldn’t my expectations be higher?  If they don’t behave like civilized people, shouldn’t I stop giving them my hard earned money?

Ok, I’ll give you this one too.  Everyone loses their cool now and again.  I get it.  I’m no exception.  But seriously, it’s still just a game.

Which brings me back to parents yelling at the games.  Look, you want to act like a maniac and live vicariously through your child?  You call it pride, I’ll call it something else.  How proud of you is your kid when you’re yelling at the umpire?  Or worse, at a kid for not making a play?  I think embarrassing is the word.

Trust me, I know.  I was good friends with a kid who played on the high school basketball team.  His dad could literally out-scream a gymnasium full of people.  The dad got tossed from a game once because he was berating the referees.  His son quit the team because he didn’t want his dad coming to the games anymore.

Would you want your kid to come home and tell you that?

What we miss is that sport teaches us valuable lessons that we can use in our daily-away-from-sports lives, like teamwork, practice, dedication, and most importantly sportsmanship.  These are the lessons we should be “coaching” with our kids.  They help us deal with relationships off the field of play.

Because really, if you’re grooming your kid to be a professional, but he or she is a flaming jerk anyway, what good does millions of dollars do them (or you) if they are hated?  And in chasing the almighty dollar, where does pushing boundaries end?  With your child cheating to win?  Getting banned from their sport and not being recognized for their achievements?  What if they don’t have the social skills to properly manage their success?  How many child sports-prodigies have struggled and ultimately failed at the professional level simply because they didn’t have the mental game to survive?  Too many to count.  That toughness doesn’t come from yelling at the Little League umpire from the stands.  It comes from teaching and coaching fundamentals and hard work.

It’s time for us to rebuild a foundation with something considerably more durable than a dollar.

And how about we start making reasons for why we can do this and stop coming up with excuses why we can’t?

9 thoughts on “The Soap Box: Your Child Does Not Play for the Blackhawks”