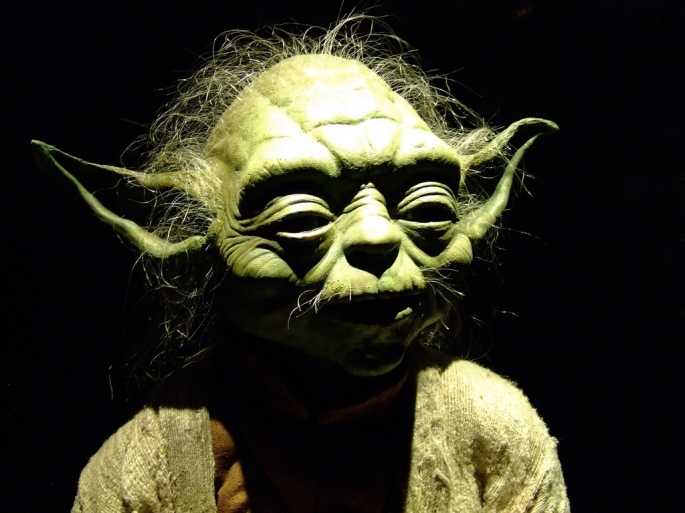 I’m having a conversation online and suddenly I’m Jar Jar Binks.  I don’t particularly like Jar Jar Binks.  If I’m going to be a character from Star Wars, I’d like to be someone cool.  Not some dopey sidekick who uses “me” instead of “I”.  But I fat fingered the keyboard and instead of typing “my” I typed “me”.

It’s not the first time.

Last time I was Yoda.  I think my sentence read like this “And I through the door walked.”  Yeah, like that makes sense unless I’m teaching a class to young Padawans.  Everyone but my dad might get that joke.  Sorry dad…

The fact is George Lucas is a psychic.  He predicted in 1977 that we’d be talking some strange language in the future.  Sure, others came before him.  Orwell, Huxley, Bradbury, Vonnegut…all pioneers in future fiction.  But I think Lucas was precognizant we’d be saying things like “Like it, me thinks.”

I actually heard a teenager say that once.

I hurt my neck craning it to see who.  We had “rad”, “awesome”, “tubular” in my day.  I love to mock the Rockstar set by saying “Bro” when I’m trying to be funny.  The urbanites have “G” and “Money” and other such slang.  But the desert rats and urban playas and Jeff Spicolis are the fringe.  The 78 lb. suburban teen with the baggy pants, unlaced shoes and an iPhone permanently fused to his hands are the epicenter.

I’m not talking about texting here folks, I’m talking about speaking.  Go to a mall and you’ll hear the verbal abbreviations.  HEAR THEM.  I’ve heard “brb” and “ttyl” and my unfavorite Yoda-ism “Do you like this or no?”

Don’t get me wrong, I wasn’t sworn in by the grammar police.  I don’t carry a badge.  I’m not a Blade Runner…but really?  “Do you like this?” is a complete sentence.  Only little green Jedi add “Or no?” to the end.

It was then I knew George Lucas had us pegged.

And to some degree, I’m a little angry about it.  Heck, the English language is difficult enough to master, and it’s the only language I speak fluently.  Now I have to learn another language just to communicate with English speaking teens?!  Like I don’t have enough to do?

I’m also a little upset as a writer.  I work hard to master the language, to put out a product so that it reads like it came from someone who knows what they’re doing.  I’m not perfect, but I work at it.  Am I the only one???

I’ll get off my soapbox now.  The truth is I’m only a little upset by it.  There is a part of me that is recognizing that our world is changing.  I’ve written here before that it seems like it’s for the worse, but I don’t think that’s necessarily the case.  I think it’s just simply changing.

We are evolving.  And what I’m discovering is that our language is evolving with us.  English is becoming a more universal language, but the evolution is more encompassing.  With the advent of the internet we have rapidly become a global community.  What is happening now is the advent of a global language.  We are witnessing the birth of change.  The birth of an evolution.  The missing link between multi-cultural languages with barriers and a truly universal language.

One hundred years from now the challenges we face in communication today will be but a memory.  We will still be faced with difficulties in relationships, but we will always be faced with those.  What will change is our ability to work through those differences using a common language.

By chance, English is a common language in the Star Wars Saga.  Lucas is an American, and so he wrote in his native language.  But the roots of change exist within the storyline.  The Galactic Senate consists of alien beings from across the galaxy, all convening in one place and communicating in a common language.  Flying spaceships, carrying laser guns and communicating via holographic imagery.

2 thoughts on “They Speak Yoda…”